skip to main | skip to sidebar

Wakeboarding: How to Wakeboard - Article

Wakeboarding: How to Wakeboard - Article


Jacky Miller is a mom of four who loves to take her family on outdoors trips. She is an experienced wakeboard instructor and spent much of the past twenty years perfecting her techniques. In her free time she also writes regularly for major websites including  Jen Reviews, Forbes, The Huffington Post and Fast Company. Thanks for getting in touch Jacky!
Posted by Lauren Traub Teton at 12:14 PM No comments:

Tight Loose premieres in NYC November 10 at the Playstation Theatre

The movie tour for TGR's latest film "Tight Loose" started in September, and continues through January 2017, spreading mad stoke for extreme snow sports across North America and into Norway, Switzerland, Austria, Sweden, and Scotland to name a few other places.


Last year's TGR party for "Paradise Waits" in NYC
See what the NYC Premiere was really like!

Autumn film tours started with Warren Miller's annual ski flick tour, and Teton Gravity Research ups the ante, appealing to a younger more extreme brand of snow sports aficionados. Athletes in the film often appear at the big film premieres, and sponsor companies raffle prizes and toss swag while whipping the audience into a delirious frenzy of pre-season excitement for snow! Lift ticket special offers usually come with each ticket. This snowboard entrepreneur was the impresario for a couple of showings of TGR's "Anomaly" in CT back in 2006! 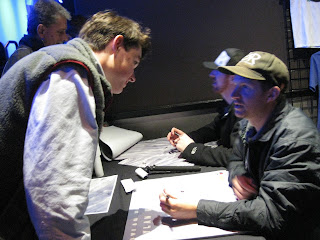 During 21 years of traveling the globe and pushing the boundaries of what is possible, TGR has experienced the full spectrum of adventure. The process has been a constant evolution of refining a lifestyle—keeping things buttoned up on the front end in order to seize the moment when things get to the edge of control.

Tight Loose is a project that celebrates the media house’s twenty-first year in business. 21 years of TGR athletes  reunite for a throw-down on a massive group shred of the Palisades at Squaw Valley
The movie athletes autograph posters last year.

Tight Loose is a project that celebrates the media house’s twenty-first year in business. 21 years of TGR athletes  reunite for a throw-down on a massive group shred of the Palisades at Squaw Valley.

"From India to Alaska, discover unridden spine walls, massive airs and full-throttle riding in some of the wildest and most spectacular places on earth.  Tight Loose is living to the fullest."
“Tight Loose marks the beginning of a production year involving some of the most significant undertakings in our history,” says TGR’s CEO, Todd Jones. “This movie is not just a huge celebration for us, but is shaping up the beginning of a year for the record books. Twenty was big, but you always remember your twenty-first birthday.”
Following the September 17 world premiere in Jackson will be a worldwide live-event tour throughout the winter of 2016/2017.

About Teton Gravity Research
TGR is the leading brand in adventure, action-sports, and youth-culture media. TGR’s world-class storytelling has captivated audiences for 21 years. With a global, multi-channel footprint, a thriving millennial audience, award-winning multimedia film projects, a rapidly growing experiential platform, and unprecedented viral content, Teton Gravity Research is one of the fastest growing media brands on the planet. TGR is a proud member of Protect Our Winters, 1% For The Planet, BICEP, Surfrider Foundation and IMBA. For more information on TGR, visit TetonGravity.com.

As sure as the leaves turn color in autumn, Warren Miller fans welcome his annual snowsports extravaganza on film. Warren Miller films attract a cult-like following and mark the official start of
winter for sport enthusiasts.This year Ticket to Ride , his 64th annual feature kicked off the
national tour of over 60 venues, with an October 11 show in Salt Lake City.

These days, when many snowboard film premieres happen online instead of in theatres and clubs
as in the past, a live community event filled with stoked snowriders is a reason to get out and celebrate! Warren Miller shows are an experience, a pre-season party not to be missed – film attendees have a chance to win ski vacations, heli-trips, prizes and gear, plus meet the athletes and get access to exclusive resort and retail savings from Warren Miller partners.

Ticket to Ride will take filmgoers on an action-packed journey with the world’s best skiers and snowboarders. Witness athletes at their career-best, and discover the path that put them at the
top of
the steepest peaks.

Experience the immense energy of the world’s most sought-after destinations, and discover the “epicenter of big lines” in Alaska, Montana’s Big Sky Country and the exotic, winter playgrounds of Kazakhstan, Iceland and Greenland. The trams and trains in Switzerland will climb to
Mt. Eiger as the fishing boats in Norway will carry you to the islands of Alesund.

Beautiful snowboard park & pipe veteran, Gretchen Bleiler throws down in Aspen proving
“girls can look like girls and still rip.” An all-female cast of Jess McMillan, Julia Mancuso and Sierra Quitiquit explore the expansive terrain that is Iceland’s Troll Peninsula, and a snowboard segment in Valdez brings two legends, Seth Wescott and Rob Kingwill, together for a rowdy, big mountain
adventure.
See Lauren's interview with Gretchen Bleiler in 2009 in the snowboard news video titled
Grand Prix Halfpipe Comp Killington VT 2.  (You can skip ahead to 3:00 to see Gretchen's interview about the halfpipe.)

“This year, Warren Miller has offset the emissions impact from filming Ticket to Ride, which is a
small step toward creating a sustainable business for the future,” said Max Bervy, Managing Director.
“As a stakeholder in winter, Warren Miller Entertainment is committed to using our voice in the winter sports community to help preserve our winters. Continuing our 64-year legacy, we look to make films that
excite and inspire skiers and riders worldwide, and we must work with and impassion our audience to pass down the tradition and make positive changes for generations to come.”

Tickets can be purchased at REI locations in select markets across the nation with no added ticketing fees.

For more information and the full schedule of shows go to www.warrenmiller.com. Tickets went on sale September 13.
Facebook Page here.

Posted by Lauren Traub Teton at 10:25 AM No comments:

see the video of

see the video of
Posted by Lauren Traub Teton at 9:27 AM No comments:

Excerpt of the article

"Snowboard experts suggest that riders can minimize injury by wearing wrist guards, knee pads, and elbow pads, just as skate boarders and inline skaters do. Also a tailbone protector. Riders can improvise this by stuffing lots of bubble wrap in the back of their pants, or they may buy a product made specifically for snowboarding.Lauren Traub Teton of Pound Ridge, an avid rider and snowboard advocate, maintains a website with good advice for riders (www.snowboardsecrets.com). She recommends products that have worked well for her. She never rides without protective gear. Lest you be concerned about how you will look with all that protective equipment, I have been out on the slopes with her several times and never noticed it. What I notice most is her enthusiasm and skill, which is certainly enhanced by her knowing she has done her best to prevent injury.

As in skiing, common reflexive habits can lead to disaster. Because of the way snowboarders usually fall, the first reaction to a loss of balance is to extend the hands out to catch oneself. No wonder the most common injury is to the wrist. Traub Teton recommends that when you feel yourself losing balance, make a fist with your hands with the thumb outside, relax as much as you can, and try to spread the impact evenly over your knees and forearms if you fall forward. Wearing kneepads will make it easier to absorb impact on your knees, and tailbone protection will make a backward fall less harmful."

Snowboard Gloves with Wrist Guards, and Skateboard Wrist Guards designed by a doctor for Flexmeters/Docmeter here.


What can save snowboarding?
How about encouraging "grown-ups" to snowboard?
Unlike teaching 7 year-olds as Burton is doing, adults have their own money and cars and will become good customers in their own right.

Learning to snowboard is well within the realm of physical possibility for adults over 40, even those who have never skied. Having both feet locked in makes the muscles around the knee strong. Properly designed snowboard wrist protection should be worn, as beginner snowboarders have a four times greater chance of a wrist injury than more experienced riders. Other snowboard protective gear is helpful and can make the difference between pain and pleasure.

There are 530,530 snowboarders age 45 and older, as extrapolated from SIA figures. Yet we are invisible: nothing is marketed to our demographic. We never see people who look like us in advertisements for snowboard gear. When some savvy companies start marketing and catering to us with respect, we will support them.

Hyperlinks in the body of the text were added to this blog post for readers' convenience and did not appear in the original post.

From the Scottish Snow Sports Safety Study:
* 25% of all snowboard injuries affect the wrist joint
* 70% of all wrist injuries were fractures (broken bones)
* Estimated 95,000 wrist fractures each year among snowboarders worldwide.

From the Colorado Snowboard Injury Survey:
* snowboarders wearing wrist guards are half as likely to injure their wrists as snowboarders not wearing guards.

See the lens about snowboarders wearing wrist guards
and join the discussion on Squidoo here.

Flexmeter Snowboard Gloves with Wrist Guards built-in, and Flexmeter Wrist Guards to wear under your gloves, or for skateboarding are designed by renowned French Mountain Doctor Marc-Herve Binet, who runs the clinic at Avoriaz Ski Resort, France.

Flexmeters are designed to FLEX at your wrist joint to absorb the shock of a fall, unlike other wrist guards.
Flexmeters, by Docmeter have been tested and proven to provide wrist protection to snowboarders and reduce snowboard wrist injuries by up to 75%.

What are you waiting for?
Get protection for your wrists at www.Flexmeters.com.
We can send them to you in the US, UK, or anywhere in the world.

See our videos of Flexmeter Gloves and Wrist Guards in action here!

Read testimonials from our happy Flexmeter customers here, including this one from Doug who says

"These are the only wrist guards that I trust, and I will not ride without them."
We have Doug's X-rays of his two broken wrists sustained in a snowboard crash while wearing another brand of wrist guard before he found Flexmeters, and unfortunately he has two titanium plates, and 26 screws to show for it.

Posted by Lauren Traub Teton at 2:25 PM No comments:

Lauren Traub Teton
Lauren loves marketing and her interests are as varied as snowboarding, product naming, and Twifties. She works in the ophthalmic field and in other business enterprise She is also the creator of "Twifties," coined to mean "people around their 50's who act like they're in their 20's and is an advocate of the Twifty lifestyle of finding fun whenever possible and inspiring others to make their lives more pleasant. Visit www.Twifties.TV for some Twifties fun entertainment videos! And www.SnowboardSecrets.TV for snowboard event coverage, life on the road, and athlete interviews. Lauren has posted over 450 videos since early Winter 2008 and has had over 1 million views on YouTube of her dynamic entertaining new style of video.